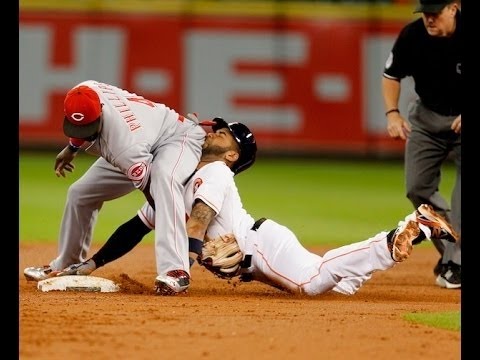 It took 37 games, but the Blue Jays finally get their 10th win as Travis Shaw hits a walk-off home run.  Toronto tops the O’s 4-3.
Speaking of walk-offs, Christin Stewart cranks a 9th inning grand slam as the Tigers come back against the Rockies 10-7.  Stewart had himself a 3 for 5 day with 5 RBI.
Buster Posey did a number on the Twins today  The Giants’ catcher banged out 5 hits in 6 at bats to lead the San Fran to a 15-7 win.  Posey is giving Evan Longoria some competition for Comeback Player of the Year.  He’s now at a .359 average.  Pablo “please stop calling me Fat Panda” Sandoval comes in during the 9th inning and singles, bringing his average to .407 through 27 at bats.
Hunter Dozier goes 2 for 4 with 2 RBI in KC’s 6-3 victory over the Astros.  Jorge Lopez moves to 4-0 going 5 innings and giving up a Yuli Gurriel solo shot.  George Springer is a day late and eating leftover tacos by the fistful wearing his golden sombrero.
Austin Allen hits a 3rd inning grand slam in Oakland’s 5-2 victory over Seattle.  Frankie Montas a perfect 4-0 now giving up 2 runs over 7 1/3 innings.
Joey Gallo crushes his 12th home run of the year, but that’s the only earned run that Shane Bieber gives up in Cleveland’s squeaker over the Rangers 3-2.
A 2-2 tie going into the 8th and the Yankees separate from the Pirates with blasts by both Luke Voit (7th) and Giancarlo Stanton (10th).  This one ends in the Yankees favor 5-2.  Gerrit Cole doesn’t factor into the decision, but gives up just 1 run over 7 while fanning 10.  Could this be the Yankees’ turning point?
The Angels shutout the Red Sox 4-0.  Eduardo Rodriguez with the first blemish on his record by giving up all 4 runs in 6 innings of work.
Yoan Moncada hits his 12th home run in the 7th inning to seal the fate of the Rays.  White Sox win this one 3-2.
Today was Rick Procello’s best day of the year so far.  He tosses a 4-hit complete game shutout of the Reds.  Sonny Gray caught holding the shit-end of the stick when the music stops.  He pitches 8 1/3 innings before Dominic Smith drives in Brandon Nimmo to end the game.  Mets win a nail-biter 1-0.
Tyler O’Neill goes 2 for 4 with his 3rd long ball in St. Louis’ 3-2 victory over the Padres.  Carlos Martinez allowing just 1 unearnd run over 5 1/3 to earn his 4th win.
Corey Dickerson hits his 4th home run to lead the Marlins over the Brewers 5-2.  Trevor Rogers tosses 7 innings of shutout ball to even his record at 2-2.
Trevor Plouffe, a blast from the past, is back in the headlines.  His 8th inning 2-run shot puts the Nationals on top of the Diamondbacks 5-4.  Plouffe was 3 for 4 with 4 RBI on the day.
Ronald Acuna’s first day back and he hits the ground running, rapping 3 hits in 4 at bats.  Johan Camargo adds 3 hits with 3 RBI to help lift the Braves 6-1 over the Phillies.  Bryse Wilson now 3-1 after giving up 2 hits over 6 1/3 giving up the lone Philly run.
Mookie Betts drives in Justin Turner in the bottom of the 12th to end the Cubs’ evening.  Cody Bellinger adds his 12th home run as the Dodgers down the Cubbies 6-5.
Transactionally speaking:
The Indians activate both Carlos Carrasco and Carlos Santana.  No word yet if the latter will play Black Magic Woman before the game;
Jorge Soler heads to the 10-day IL with back stiffness;
Tampa activates Austin Meadows;
Kansas City signs Austin Jackson to a minor league deal; and
Brett Gardner and Chad Kuhl have officially been suspended after their melee yesterday and get 4 and 9 games respectively.
That’s our trip around the diamond for today folks.  Stop on by for feeding time tomorrow.